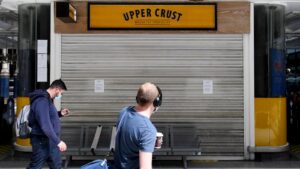 The transport catering group behind the Ritazza and Upper Crust brands reported signs of a trading improvement but cautioned that it did not expect to return to pre-pandemic levels until 2024.

SSP Group said that sales for this month were down 70 per cent on 2019 levels. This was an improvement on the 78 per cent fall reported in the second quarter, reflecting better trading in Britain and the United States. The number of sites open had increased from 32 per cent to 40 per cent.

It said that cash burn had moderated to £23 million, compared with previous guidance of £25 million to £30 million as it hammered away at costs, while liquidity was strong at £843 million after the recent £475 million equity raise, its second of the pandemic.

Simon Smith, chief executive, said that redundancies in the UK were closer to 4,000 than the 5,000 announced last year and that, as well as starting to bring back 2,800 furloughed staff, it was about to recruit between 300 and 500 staff. He said that employees who had been made redundant were being given first opportunity to rejoin the company, although many had found other jobs.

SSP, once part of Compass Group, operates 2,700 outlets at 180 airports and 300 railway stations in 35 countries. It operates its own brands such as Upper Crust and Camden Food Co as well as franchises including Burger King and Starbucks. In the half year to the end of March SSP reported a 78.8 per cent fall in revenues to £256.7 million, with like-for-like sales down 79 per cent. This was attributed to “material reductions” in passenger numbers in airports and railway stations.

The group said that it had reopened a further 250 outlets since the end of the half year, lifting the total number trading to about 1,150.

In the UK, SSP’s business swung from an underlying profit of £23.1 million to a loss of £37.8 million on revenues down 87.8 per cent at £45.6 million. It reported a recent improvement in its rail business, in particular, as customers returned to trains for work and leisure, and sales last week had reached 75 per cent of 2019 levels.

Smith said that mainline stations in big cities were trading well and that he expected most of the group’s rail outlets to have reopened by the middle of next month. “It’s been a very tough period but we’ve got a good grip on costs, we’ve got plenty of liquidity, we’ve got a big pipeline of new business to open and we continue to invest in making sure we maintain a competitive advantage,” he said. Shares of SSP fell 5¾p, or 1.9 per cent, to close at 302¼p.