By Ana Olivia A. Tirona, Researcher

Preliminary data by the PSA showed the country’s total external trade in goods — or the sum of merchandise exports and imports — stood at $14.16 billion in April, more than double the $6.83 billion in the same month last year. 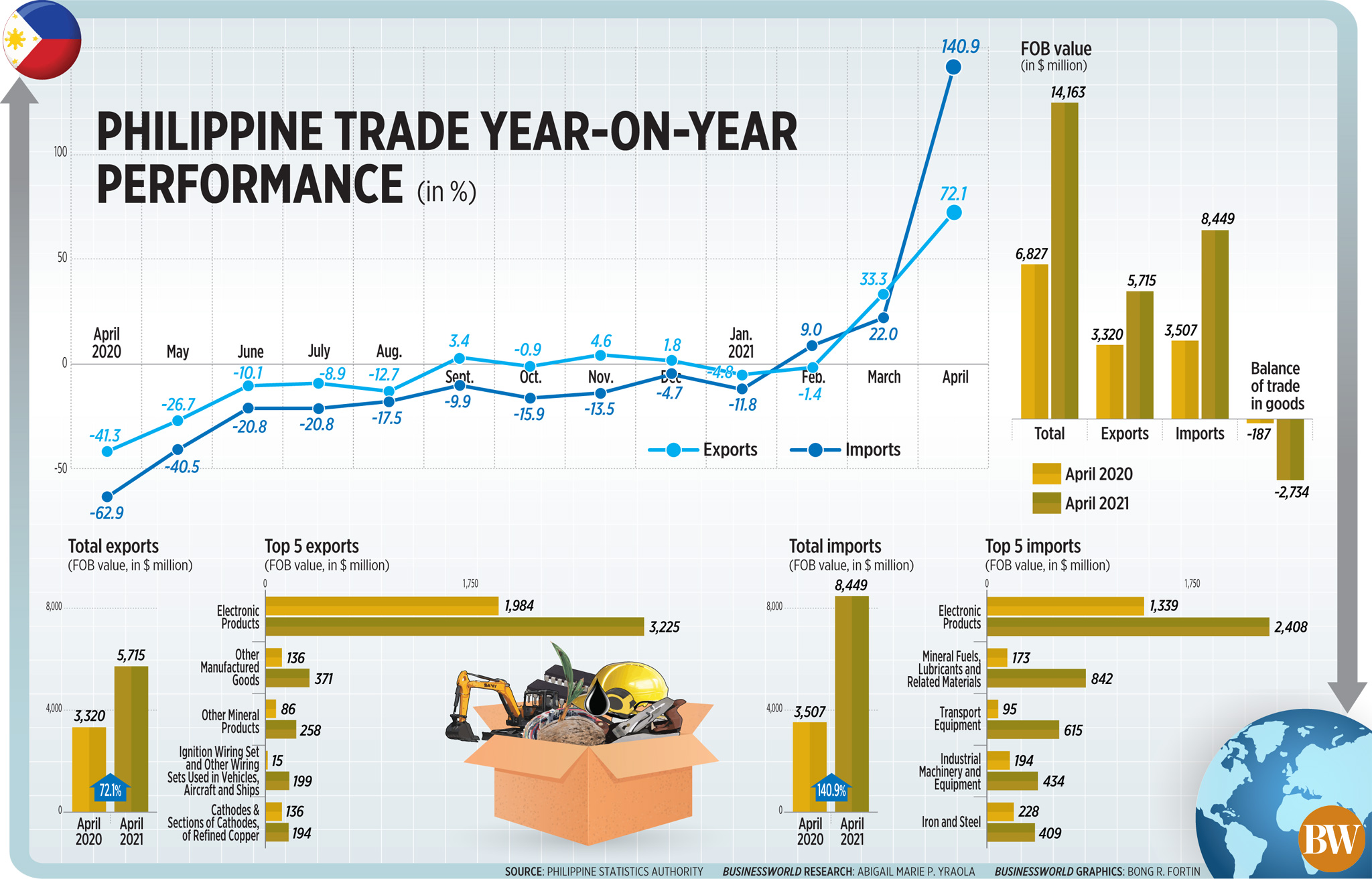 The April growth figures were the fastest recorded since at least 1991 — the earliest year with available PSA trade data. This also marked the second and third consecutive month of growth for exports and imports, respectively.

For the same four-month period, exports and imports grew by an annual 19% (to $23.37 billion) and 21.9% (to $34.46 billion), respectively. These surpassed the Development Budget Coordination Committee’s revised growth targets for exports and imports at 8% and 12% for the year.

Exports of manufactured goods grew by 88.1% to $4.71 billion in April. These goods accounted for 82.3% of total export sales that month.

The exports of electronic products grew by 62.6% to $3.22 billion in April, with semiconductors chipping in $2.41 billion, up 40.4%. Electronic products made up 68.5% of manufactured goods exports and 56.4% of total exported goods.

All major import items saw significant annual growth in April. Purchases of raw materials and intermediate goods surged by 118.6% to $3.40 billion from last year’s $1.56 billion. These goods account for 40.2% of the country’s import goods that month.

Capital goods, which comprised 32% of the total, more than doubled to $2.71 billion from $1.32 billion in the same period last year.

Purchases of mineral fuels, lubricant and related materials also shot up by almost five times to $841.90 million from $172.57 million previously.

In a note sent to reporters, the Department of Trade and Industry (DTI) said the country’s 72.1% export growth rate in April was the highest among select Asian economies, beating the performances of Malaysia (62.7%), Indonesia (52%), and Vietnam (51%).

“Our latest export growth rate shows that we are steadily recovering from the negative impact of the COVID-19 (coronavirus disease 2019) pandemic. It can be considered a solid growth considering that the performance was even stronger than the pre-pandemic levels in 2019, and not just due to the low base in 2020,” Trade Secretary Ramon M. Lopez was quoted in the statement as saying.

Mr. Lopez added the $5.71-billion export earnings recorded in April was higher compared with the $5.65 billion in the same month in 2019.

At the same time, the Trade chief said the doubling of imports of capital goods, raw materials and intermediate goods during the month indicated a pickup in the country’s manufacturing sector.

In a Zoom video interview, Semiconductor and Electronics Industries in the Philippines, Inc. (SEIPI) President Danilo C. Lachica attributed the results in April to an uptick in aggregate demand.

“This buoyant growth in electronics exports reflected the global boom in electronics demand since mid-2020, as households in the US and the [European Union] have ramped up their purchases of electronics goods,” Mr. Biswas said in an e-mail to BusinessWorld.

In a statement, ING Bank N.V. Manila Senior Economist Nicholas Antonio T. Mapa attributed April’s performance to base effects given the stringent lockdowns imposed in April last year at the onset of the pandemic.

Mr. Mapa also pointed out that despite the stellar year-on-year growth, exports and imports in April were actually down from March as the government reinstated tighter restrictions to try to slow the surge in COVID-19 cases.

“April trade data suggests that lockdowns hindered both inbound and outbound shipments as well and we can expect a sustained pickup for both exports and imports in the near term as mobility curbs are relaxed… although the trade balance will likely remain at manageable levels of roughly $3.0 billion with capital-intensive imports not likely to pick up considerably given still subdued investment appetite,” Mr. Mapa further noted.

DTI’s Mr. Lopez was similarly upbeat: “As we gradually and safely reopen our economies both locally and abroad, we are confident that we will see a sustained improvement in our export growth rate this year,” he said.

SEIPI’s Mr. Lachica reiterated their target for exports to grow by 7% this year.

“By luck, it still depends on the availability of raw materials… [T]o sustain the momentum, we need to make sure the vaccination deployment is going as planned. The problem is, if we have another surge, we have to scale down our operations again,” said Mr. Lachica.