In an era where clean energy is continually being propagated, lithium ion battery industry has been gaining exceptional prominence, given that the product is extensively used in phones, computers, cordless power tools, battery operated vehicles, and more. The popularity of this business space has been validated through a recent instance, when smart battery systems firm Forsee Power introduced its next-generation extra-thin lithium-ion batteries in January 2021. Dubbed Slim, the new batteries represent the thinnest modular range worldwide, and are also equipped with a liquid cooling system.

The engineering teams from Forsee Power have developed these advanced slim lithium-ion batteries, equipped with unparalleled technical characteristics and myriad integration capabilities, in order to adapt to changes in various target markets like non-road vehicle, boats, trains and buses. The Slim range will address all the needs of electric mobility operators and manufacturers in terms of cost, performance and passenger capacity.

Considering the energy benefits of lithium ion batteries, many regional governments and end-use companies have also shifted their focus toward the development and implementation of this product for various applications. In addition, the renowned giants in lithium ion battery industry have been looking forward to innovating products, in compliance with the set regulatory norms, which would also have a powerful impact on the overall business expansion.

One of the most pivotal driving forces of lithium ion battery market is the depleting fossil fuel resources and the subsequently increasing awareness among people about the hazardous impact of pollutants extracted from the combustion of fossil fuels. In consequence, most of the well-known automakers have been shifting their focus from the development of conventional vehicles to battery-based vehicles. 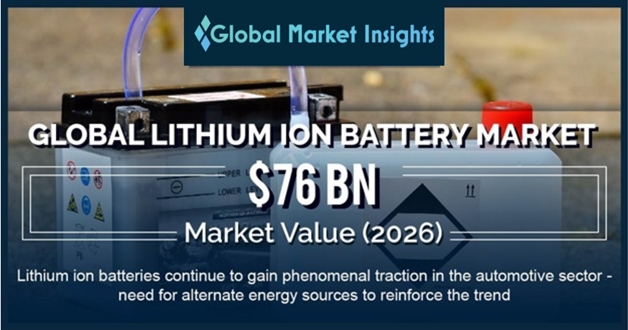 In fact, to reshape future of mobility, many more electric startup companies such as Rimac Automobil, Elextra, Uniti, Lucid, Faraday Future, Fisker, Tesla, Rivian, NIO Limited and Weltmeister have been making huge investments in energy saving technologies. Several glimpses of the same have been observed in lithium ion battery industry lately, a couple of which have been enlisted below:

Volexion’s technology demonstrates strong potential across various applications including electric vehicles, grid storage, etc. which is evident from its string of agreements inked with automotive equipment manufacturers and battery producers.

Renowned behemoths across several countries are now prioritizing battery-powered EVs over combustion engines pertaining to the latter’s long-range benefits such as usage of clean energy, zero noise, and air pollution. In order to increase the deployment of fossil fuels and curb pollution levels, various regulatory bodies have been enforcing stringent norms. It would eventually help increase the adoption of electric vehicles. In consequence, this is expected to have a lucrative impact on the revenue graph of lithium ion battery industry.

How is Asia Pacific becoming a prominent growth avenue in the Li-ion battery industry?

The APAC region has emerged as one of the most dynamic regions across the globe over the past few decades and has rapidly become an integral driving force for the global economy. In the lithium-ion battery industry too, the region, particularly countries like Japan, India, China and Korea, among others, have shown tremendous growth.

These countries are focusing their investments mainly on areas like 3C consumer electronics, solar energy and electric vehicles, which is adding impetus to regional lithium ion battery market development in recent years. Most notable is the shift towards combined solar-plus-storage projects, which are emerging as key factors to the growth of the utility-scale energy storage domain worldwide.

Citing an instance, Chinese PV producer Jetion Solar recently announced the completion of what it claims to be the highest-altitude, largescale solar-plus-storage project in the world. Based in Tibet, the facility with a 40 MW/193 MWh capacity sits at over 4,700m above sea level, and receives nearly 3,200 hours of sunlight annually.

Furthermore, as population levels in emerging APAC nations continue to surge, in addition to the growing acceptance for solar energy, the adoption of Li-ion batteries for energy storage will witness a considerable rise over the foreseeable future.

To that end, in October 2020, Wärtsilä installed the first utility-scale lithium-ion battery storage project in Singapore, with a 2.4MW / 2.4MWh ESS (energy storage system). The project is supported by the EMA (Energy Market Authority) of Singapore and energy utilities firm SP Group, with an order of an additional 90MW / 90MWh of battery storage under its belt from a Southeast Asian customer.

Taking into account the proliferation of electric vehicles, major tech giants in Li-ion battery market have shifted their focus toward the development of advanced battery packs. For instance, the Tokyo-based electronics manufacturer, Toshiba had developed the next-generation SCiB battery, which was incorporated with the newly developed titanium niobium oxide anode material. Generally, graphite-based anodes are used in Li-ion, but the newly replaced anode is expected to double the battery capacity. Apart from deploying innovative technology to encourage people to adopt Li-Ion battery based products, key producers of Li-ion batteries are working continuously to reduce the overall capital costs.

Considering the shifting trends toward the implementation of renewable energy technologies, it has been predicted that in the future, the deployment of Li-ion battery would not only increase for automotive applications but also for the household sector, consumer electronics, and energy storage systems for manufacturing plants. Driven by a strict regulatory frame of reference that mandates norms to adopt clean energy facilities, lithium ion battery industry size, as per Global Market Insights, Inc., is likely to surpass a revenue of USD 76 billion by the end of 2026.